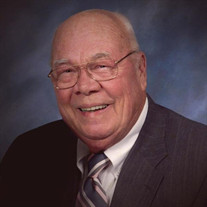 Francis M. Durchholz, Jr., 87, of Evansville, passed away peacefully Friday, October 23, 2020 at Pine Haven Health and Rehabilitation. He was born September 11, 1933 in a house on New York Avenue in Evansville to the late Francis “Frank” Durchholz, Sr. and Anna (Spindler) Durchholz. Francis attended St. Benedict Grade School and graduated from Reitz Memorial High School in 1951. He served as a painter’s apprentice after high school until he was called to duty with the US Army from 1951 to 1954. He served as company clerk and typist. While touring in Germany, he got to meet some of his relatives. After he returned home from service, Francis continued working as a Journeyman painter. He painted and applied wallcoverings for both residential and commercial properties and taught new apprentices. Francis was employed at Simms Painting Company and was a member of Local 156. He has been a lifelong member of St. Benedict Cathedral Church, serving as an Alter Boy in his youth and later starting Bingo and serving as Treasurer. He was also a life time member of American Legion Post 265 and the NRA. Francis enjoyed fueling the economy by rescuing tools and other treasures at the Diamond Avenue Flea Market and rummage sales. Francis married Alice Keenan in 1956 and raised three children. They were married for 61 years before she passed in 2017. Francis is survived by his daughters; Debbie (David) Beswick, Judy (Don) Sallee, and Rita (Victor) Stotlar; grandchildren; Rene Jeffries, Heath (Casey) Jeffries, Paul (Taymara) Davis, Jr., Nathan (Kellye) Beswick and Alison Liggett; 18 great grandchildren and 2 great-great grandchildren; brothers, Gene Durchholz, Tony (Pat) Durchholz and Jim Durchholz; sister; Barbara (Jim) Key; brother-in-law, Andy Hall, and many nieces and nephews. He was preceded in death by his parents and his wife, Alice Irene (Keenan) Durchholz. Visitation will be from 1:00 p.m. to 5:00 p.m. Sunday, October 25, 2020 at Ziemer Funeral Home East Chapel, 800 Hebron Ave., Evansville. Funeral Service will be held at 10:00 a.m. Monday, October 26, 2020 at Ziemer Funeral Home East Chapel with Fr. Godfrey Mullen, OSB officiating. Entombment will follow at Memorial Park Cemetery. The family would like to give a special thanks to Heart to Heart Hospice and Pine Haven staff for attending to Francis’s needs. Memorial contributions may be made to St. Benedict Cathedral, 1328 Lincoln Ave., Evansville, IN 47714. Condolences may be made online at www.ziemrfuneralhome.com.

Francis M. Durchholz, Jr., 87, of Evansville, passed away peacefully Friday, October 23, 2020 at Pine Haven Health and Rehabilitation. He was born September 11, 1933 in a house on New York Avenue in Evansville to the late Francis &#8220;Frank&#8221;... View Obituary & Service Information

The family of Francis M. Durchholz Jr. created this Life Tributes page to make it easy to share your memories.

Send flowers to the Durchholz family.