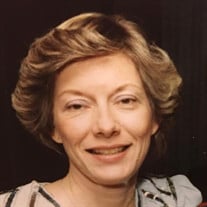 Frances (Francie) Elizabeth Reitz Cook, 81, of Evansville IN, passed away on Wednesday, March 30, 2022 with her loving husband Don and sister Barbara by her side. Francie worked many years for Household Finance and retired as Office Manager. She then went to work for Williams Travel Agency where she discovered her love of traveling the world with many close friends. In the prime of her life she met and fell in love with, and later married, Donald Cook. They became avid Evansville Aces fans and went to as many games home away as possible, while making many new friends along the way. They explored and traveled as many places together as they could all over the world. In 1984 Francie and Don opened Don Cook frame shop where they enjoyed the community while framing their customers’ personal treasures. They both retired after 25 years together in the shop. Francie was a member of The University of Evansville President’s Club, The Junior League of Evansville, and Tri Kappa Philanthropic Sorority. She also served on the Board of Directors for The Reitz Home and served as an Auxiliary Member. One of the most interesting things Francie and her sister Barbara did was to co-host Murder Mysteries for The Reitz Home and The Christmas Reindeer Romp. She also served on the committee for the “Jewel of the City” Ball and Gala featuring the Reitz Home Chalice. In her role as Aunt Francie she helped care for her niece, Lisa Ann, with many trips to local hospitals and to Riley Hospital for 21 years. Francie was also very active in The Evansville ARC and worked many hours on the annual Halloween candy sale, packing and selling thousands of bags benefiting children with disabilities. Francie was involved in many other clubs and groups, where she formed many lasting friendships. She will be missed by many friends, especially her Memorial High School Classmates for whom she helped plan many reunions. Francie is survived by her husband of 37 years, Donald Cook; her sister, Barbara Ann Doris; sister-in-law, Dorothy Theriac; niece, Terry Mominee; nephews, David Theriac and Gary Theriac; and many great nieces and great nephews. She was preceded in death by both parents, Mr. and Mrs. Frank A Reitz; mother-in-law and father-in-law, Mr. and Mrs. Cecil Cook; and brothers-in-law, Oscar Theriac and Michael A Doris. The family would like to thank Heritage Hospice, Newburgh Health Care North Unit and Nurse Mary Jones for her beautiful songs and prayers. Memorial Contributions may be made to Riley Children’s Foundation in memory of Francie Reitz Cook, 500 N. Meridian Street, Suite 100, Indianapolis, IN 46204. A Celebration of Life will be held at a later date. Condolences may be made online at www.ziemerfuneralhome.com

Frances (Francie) Elizabeth Reitz Cook, 81, of Evansville IN, passed away on Wednesday, March 30, 2022 with her loving husband Don and sister Barbara by her side. Francie worked many years for Household Finance and retired as Office Manager.... View Obituary & Service Information

The family of Frances "Francie" Elizabeth Reitz Cook created this Life Tributes page to make it easy to share your memories.