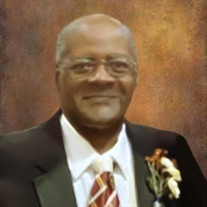 Ernest F. Meriwether, Jr., 71, of Evansville, passed away Thursday, February 11, 2021 at Deaconess Gateway Hospital. He was born May 26, 1949 in Evansville, to the late Ernest F. and Elnora (Henderson) Meriwether. Ernie graduated from Central High School and the Police Academy in Plainfield, IN. He joined the Evansville Police Department in 1974 where he received multiple merit awards. Ernie retired as a Detective in 1999. He was a longtime member of the F.O.P. and a former member of Mt. Olive of Galilee Church. Ernie was an avid fisherman and enjoyed barbequing, watching the Chicago Cubs and singing. Ernie is survived by his wife of 52 years, Karen (Freeman) Meriwether; sons, Ernest F. Meriwether, III, Tony Meriwether, and Jamil Meriwether; daughters, LaToya Shepard, KaNisha Meriwether, and RaChaya Meriwether; 13 grandchildren; six great grandchildren; brothers, Jesse Meriwether, Larry (Camilla) Meriwether, and Edward Meriwether; sister, Rebecca Meriwether; and a host of nieces and nephews. In addition to his parents, Ernie was preceded in death by his sisters, Barbara Lynch and Quincetta Hurst; sister-in-law, Foressa Meriwether. Visitation will be from 11:00 a.m. to 1:00 p.m. Friday, February 19, 2021 at Ziemer Funeral Home East Chapel, 800 S. Hebron Avenue. Due to the pandemic, masks will be required and social distancing observed. Funeral services will begin at 1:00 p.m. and will be private for family only at the funeral home with Father Godfrey Mullen officiating. The service will be live-streamed on the Ziemer Funeral Home and Cremation Services’ Facebook page 20 minutes prior to the service time. Burial will follow at Oak Hill Cemetery. Memorial contributions may be made to St. Benedict Cathedral, 1328 Lincoln Avenue, Evansville, IN 47714. Condolences may be made online at www.ziemerfuneralhome.com.

The family of Ernest "Ernie" F. Meriwether Jr. created this Life Tributes page to make it easy to share your memories.

Send flowers to the Meriwether family.