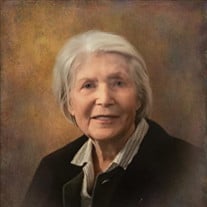 Elli (Maria Eleonora) Schricker-Trentini passed away peacefully on Monday June 21, 2021. She was born May 22, 1929 in Iran and married her love, Carlo Trentini, November 15, 1953. For their honeymoon, they traveled throughout Europe where she and Carlo visited European companies to sell their goods in Iran. This was the start of a successful business in Iran. A few amazing things about Elli was that she was the first female air traffic controller in Asia and the Middle East. She also received her pilot’s license and she flew Beachcraft airplanes solo. She was an accomplished fencer and was chosen to represent Iran in the Olympics but was not able to attend as she became pregnant with her first son. They had three sons, Roberto, Rolando and Dario. They lived in Austria and Switzerland before moving to the United States to be close to their children. They lived in New York City and Carlo passed away in 2010. After he passed away Elli moved to Evansville, Indiana and resided at Solarbron where she met many of the residents. She became a proud US citizen at the young age of 86. Elli is survived by her sons, Roberto (Paula), Rolando (Kathy) and Dario (Sara); grandchildren, GianCarlo, Emilio, Fabio, Christina, Luciano, Giovanna, Alberto, Matteo and Daniel Trentini, John and Andrew Diekhoff; and great granddaughter, Ellyana Aubry. Visitation will be from 4:00 p.m. to 6:00 p.m. Friday June 25, 2021 at Ziemer Funeral Home East Chapel, 800 S. Hebron Avenue, Evansville. A Celebration of Life will begin at 6:00 p.m. with Father Jason Gries officiating. Elli will be buried next to her husband at Saint Patrick’s Cemetery in Cold Spring Harbor, New York. The family would like to thank her dedicated and loving caregivers Teresa, Talia, Julie, Sharon and Kelle. Also a special thanks to the nurses from Kindred Hospice and the staff at Solarbron Senior Living. Condolences may be made online at www.ziemerfuneralhome.com.

Elli (Maria Eleonora) Schricker-Trentini passed away peacefully on Monday June 21, 2021. She was born May 22, 1929 in Iran and married her love, Carlo Trentini, November 15, 1953. For their honeymoon, they traveled throughout Europe where she... View Obituary & Service Information

The family of Elli (Maria Eleonora) Schricker-Trentini created this Life Tributes page to make it easy to share your memories.

Send flowers to the Schricker-Trentini family.