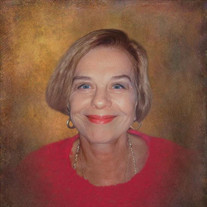 Elizabeth Ann Manhart Barrett, RN; PhD; FAAN, passed away peacefully with her children by her side on Monday, August 23, 2021 at her home in Newburgh, IN. She was 87 and is survived by her five children born in six years (1954-1960): Joseph... View Obituary & Service Information

The family of Elizabeth Ann Barrett, RN, PhD, FAAN created this Life Tributes page to make it easy to share your memories.