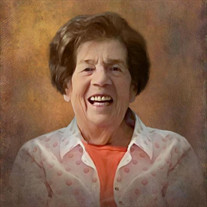 Dorothy Grosz Parsons passed away on Saturday, October 30, 2021 at Evansville Protestant Home. She was 95 years old. Until the end, she kept herself active with knitting, playing online bridge, and spending as much time as possible with her large family. Her hand-knit Christmas stockings hang in many homes across the United States and even the world. Dorothy was born in Pittsburgh, PA to Kathryn McDowell Grosz and George Grosz. She attended Beaver College (now Arcadia University) where her degree was in Dietetics & Food. She worked in several hospitals in Pittsburgh as a dietician, and later taught high school there. She met and married Robert L. Parsons in 1949, and they were married for nearly 70 years. Together they had four children, Kathryn “Kitty” Savia (Alfred), Robert G. Parsons (Susan), Scott R. Parsons (Laura), and Donald G. Parsons (Lisa). She had seven granddaughters – Laura Savia, Juliana Savia Clayton, Stephanie Parsons, Stacie Parsons Schalasky, Sierra Parsons Edmonds, Sarah Parsons and Aden Parsons - all of whom learned how to make the best chocolate chip cookies with their Grandma. She was also a great grandmother to Hunter, Hayden, and Zoë. Growing up, she attended Plum Creek Presbyterian Church, the sixth generation of her family to be baptized there. In 1960, she and her family moved to Evansville, IN where her husband Robert helped open the new ALCOA plant in Warrick County. While raising her active family here, she was Treasurer for The Hen House (an arts & crafts consignment shop run by women), a substitute teacher in EVSC, and a home economist for Schnucks Markets. She enjoyed bowling, golf and cheering on her Pittsburgh Steelers. Dorothy lived a truly spectacular life surrounded by friends and family. She made everyone feel loved and important – case in point, each granddaughter is certain that she is Grandma’s Favorite! She was a member of St. John’s East United Church of Christ. A gathering and service to celebrate her life will be held at St. Johns UCC East, 7000 Lincoln Ave. on Wednesday, November 17 with visitation from 4:00 PM, and service at 5:15. The family would like to thank Dr. William Hardesty and the caring staff at the Protestant Home. Donations may be made to your favorite cause in her name. Condolences may be made online www.ziemerfuneralhome.com

Dorothy Grosz Parsons passed away on Saturday, October 30, 2021 at Evansville Protestant Home. She was 95 years old. Until the end, she kept herself active with knitting, playing online bridge, and spending as much time as possible with her... View Obituary & Service Information

The family of Dorothy Parsons created this Life Tributes page to make it easy to share your memories.

Send flowers to the Parsons family.