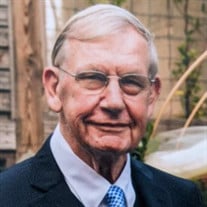 Donald Gene Tepool, Sr., 89, passed away on December 24, 2020 at St. Vincent Medical Center, surrounded by his wife and children. He was born in Evansville, IN on March 31, 1931 to the late Ervin and Catherine “Katie” (Altstadt) Tepool. He grew up on the west side of Evansville; attended St. Boniface Catholic Church and grade school, and Mater Dei Catholic High School, where he played on the football and basketball teams. He was in the first graduating class of 1950. Don met his lifelong love, Andrea Kiefer, at the She-He He-She, the diocesan teen club, when Andrea was only 14 and he 17 years old. Don was a veteran of the United States Army, serving in the Korean War as an MP in Germany. While stationed in Germany, he mailed love letters to Andrea, daily. They married on May 15, 1954 at St. Benedict Church. He earned a degree in business from Evansville College in 1960. After graduation he started his sales career with A.D.T. Security Systems, earning numerous awards, and retired in 1996. Don and Andrea became founding members of Holy Spirit Catholic Church and started their family. Don was finance chairman and head usher at the 11am Sunday Mass. He was instrumental in starting many programs at Holy Spirit, including the Men’s Club, Bingo, and Little League Baseball, while spearheading building projects for sports fields, the gym, and tennis courts. He loved heading up the Black Jack table at the annual Summer Social. He coached basketball, played softball and volleyball. Don, with his wife, received the 2014 Brute’ Award, for his service to the church. He was an avid sports fan and athlete, loyal to his beloved Mater Dei and University of Evansville alma maters. He attended over 900 Aces basketball games and never missed a Mater Dei football game. In addition to playing tennis until age 81, Don also pitched for the Diehards Softball rec team alongside his son, son-in-law, and grandson, past his 70th birthday. Don and Andrea loved to travel, taking yearly vacations with their children and grandchildren to DisneyWorld, and many other memorable trips. They regularly snow-skiied in Colorado with their Holy Spirit friends, and travelled to Europe. Locally, he never missed the annual Volksfest at Germania Maennerchor. Don played Clabber from childhood until this year and you could always give Don a jigsaw puzzle as a gift. His favorite time of year was Christmas, going all out on decorating, gifts, and holiday cheer, making his death on Christmas Eve fitting. Along with his parents, Don was preceded in death by his brother and sister-in-law, Richard and Laverne Tepool; his nephew, Ricky Tepool; his father and mother-in-law, Edward and Mona Kiefer; and his sister-in-law, Kate Kiefer. Along with his wife, Andrea, Don is survived by his four children, Don Tepool, Jr. (Cheryl) of Newburgh, IN; Cindy Johnson, of Evansville, IN; Beth Becker (Bernie) of Newburgh, IN, and David Tepool, of Evansville, IN; grandchildren, Nathan Tepool, Katie Gibson (Brandon), Michelle Force (Mike), Melissa Johnson, Erica Becker, Evan Becker, Noelle Becker, and Nicholas Becker; great-grandchildren, Jack Hyde, and Emma Gibson; brother-in-law, Edward Kiefer, brother-in-law, Roger “Podgie” (Suzie) Kiefer, sister-in-law, Ramona (David) Paul; and 18 nieces and nephews. Visitation will be from 2:00 to 7:00 p.m., Tuesday, December 29, 2020 at Ziemer Funeral Home East Chapel, 800 S. Hebron Ave., and continue from 10:30 a.m. to 11:00a.m., Wednesday, December 30, at Holy Spirit Catholic Church, 1760 Lodge Ave., Evansville. A Mass of Christian Burial will begin at 11:00 a.m. at the church with Fr. Alex Zenthoefer officiating. Services will be live streamed on Ziemer Funeral Home and Cremation Services Facebook Page 20 minutes before the service. Burial will be at St. Joseph Cemetery. Memorial contributions may be made to Mater Dei High School, 1300 harmony Way, Evansville, IN 47720 or Annunciation Parish, Holy Spirit Campus. Condolences may be made online at www.ziemerfuneralhome.com

The family of Donald G Tepool Sr. created this Life Tributes page to make it easy to share your memories.

Send flowers to the Tepool family.