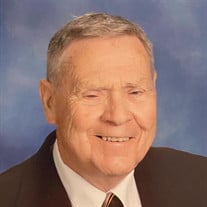 Donald E. Brown, 88, of Newburgh, passed away Thursday, February 25th, 2021 at River Pointe Health Campus. He was born March 15th, 1932 in Shoals, Indiana to the late Carl L. and Edith (Cannon) Brown. Don was a graduate of Memorial High School in 1950 and went on to graduate from Lockyear’s Business College. He served in the United States Air Force and was a veteran of the Korean War. Retiring from the Air Force Reserves with a rank of E8 Senior Master Sergeant, First Sergeant of the 930th tactical fighter group having served more than 40 years of active and reserve duty; he was awarded the Meritorious Service Medal. Don was employed at Whirlpool as a head operator and in Material Control where he retired after 36 years. He was a long standing and proud charter member of Nativity Catholic Church, current member of Holy Rosary Catholic Church, and a member of the VFW Post 1114. At Nativity, he coached youth baseball where he won numerous championships with Hagan Appliances. He was active in scouting at Nativity as Cub Scout Leader and Scoutmaster for all 5 of his sons. He oversaw many blue & gold banquets, fishing rodeos, and jamborees. An avid runner since 1967, Don ran 32 marathons, the Boston Marathon in 1979, 2 ultra-marathons, one of which was 50 miles and another that was 62.1 miles. During his 52 years at the YMCA (1967-2019) he acquired many lifelong friendships. His passion for running, physical fitness, and his raw grit and determination inspired every person he met along the way. Donald is survived by his sons: Donald E. (Bethanne) Brown, Mark R. Brown, David R. (Mary) Brown, Jeffrey K. (Dana) Brown, all of Evansville, and Richard N. (Stephanie) Brown of Boonville, and daughters: Susan L. Flick of Evansville and Melissa J. (Tim) Wesbecher of Newburgh, 21 grandchildren, 26 great-grandchildren (and 1 on the way), several nieces & nephews and running buddy and special friend of many years, Dr. Steven Elliott. In addition to his parents, Donald was preceded in death by his wife, Jane (Miller) Brown on October 9th, 2001 after 49 years of marriage; his brothers: Joseph C. Brown, William Robert Brown, and Carl Brown Jr.; his sisters: Mary Divine, Betty Baize, and Reva Bledsoe; and grandchildren: Tiffany M. Brown on February 9th, 2004, and Matthew D. Brown on April 1st, 1987. Visitation will be from 2:00 to 8:00 pm Monday, March 1st, 2021 at Ziemer Funeral Home East Chapel, 800 S. Hebron Ave. Funeral services will begin at 9:30 a.m. Tuesday, March 2nd, 2021 at the funeral home. A Mass of Christian Burial will be held at 10:00 am at Holy Rosary Catholic Church, 1301 South Green River Rd. with Father Ziliak officiating. A live stream of the mass will open 20 minutes prior to services on the Ziemer Funeral Home and Cremation Services Facebook page. Burial will follow at St. Joseph Catholic Cemetery with military rights. Memorial contributions may be made to Chemo Buddies, 3700 Bellemeade Ave., Suite 118, Evansville, IN, 47714 or Holy Rosary Catholic Church. Condolences may be made online at www.ziemerfuneralhome.com.

The family of Donald E. Brown created this Life Tributes page to make it easy to share your memories.

Send flowers to the Brown family.