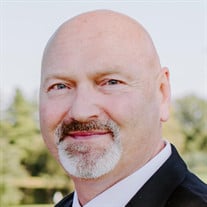 Charles Brian Wandling, 56-years old, of Evansville, IN, born January 31, 1964, in East St. Louis, IL, passed away on October 19, 2020, at Deaconess Hospital in Evansville, Indiana, surrounded by family. Brian graduated from Collinsville High School in Collinsville, IL in 1982. He received his bachelor’s degree in Mechanical Engineering from the University of Evansville in 1986, where he was a member of the Lambda Chi Alpha Fraternity and a member of the football team. He started his career at the engineering firm of Biagi, Chance, Cummins, London, Titzer, Inc. and then worked as an engineer at Alcoa before beginning his 26+ year career at Control Specialists. Brian started out as a sales engineer and eventually became President of the company in 2012. Brian also served as a past president of the local ASHRAE chapter. As a Professional Engineer, Brian enthusiastically supported the Mechanical Engineering program at his alma mater, U.E., and gave his time to help inspire the next generation of engineers. His exemplary career included a strong history of success in sales and business development. Brian strived to instill these traits in his employees, so that they may build on his foundation and continue his legacy of success. He loved each and every one of his dedicated employees and took great pride in helping them grow and develop their own careers. He constantly shared his knowledge with others, never missing an opportunity to take advantage of a teachable moment. Brian had a larger than life personality and was well loved for his ability to make people laugh and turn strangers into friends. He enjoyed SCUBA diving, boating at Lake Barkley, cheering on America’s Team - the Dallas Cowboys, and spending days at the racetrack. He loved spending time with his friends, especially during his annual guys trips. Brian was always his children’s biggest fan, regularly driving back and forth from out-of-state jobsites to catch Jon’s baseball games or Jacqui’s soccer games. Since the birth of his grandson, Witten, he loved spending time making him laugh and smile. Brian will be missed in every way by his family, friends, and employees. While Brian’s infectious personality cannot be replaced, we will continue to cheer on the Cowboys for him and always try to make our loved ones laugh and feel supported in his honor. Brian was preceded in death by his parents, Charles and Patricia, née Steiner, Wandling. He is survived by his children, Jonathon (Tawne) Wandling and Jacqui (Megan) Wandling; his grandson, Witten Wandling; the mother of his children, Janet Wandling; his brother, Michael (Diane) Wandling and sister, Diane (Richard) Danjanic; his niece and nephews, Audrey Wandling, Luke Danjanic, Thomas Wandling, and Roman; and his uncle, Dr. Kenneth (Lorah) Steiner. Also surviving Brian are his many childhood friends from Collinsville, IL, his college friends from University of Evansville, and the many friends he made along the way. Due to the current pandemic, the family is having a drive-by visitation at Ziemer Funeral Home East Chapel, 800 S. Hebron Avenue from 12:30 p.m. to 2:30 p.m., Saturday, October 24, 2020. A graveside service will be held at Sunset Memorial Park Cemetery at 3:00 p.m. Saturday. Mask and social distancing will be required. Memorials may be made to the Koch Center for Engineering and Science at the University of Evansville, 1800 Lincoln Avenue, Evansville, IN 47722 or the East Youth Baseball, 220 Vann Avenue, Evansville, IN 47714. Condolences may be made online at www.ziemerfuneralhome.com.

The family of Charles "Brian" Wandling created this Life Tributes page to make it easy to share your memories.

Send flowers to the Wandling family.