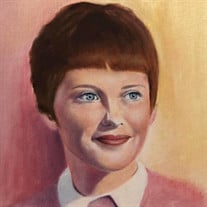 Carol Wersich, 80, of Evansville, passed away Monday, January 11, 2021 at St. Vincent Hospital. She was born February 3, 1940 in Evansville to the late Homer and Edna (Lang) Wersich. Carol graduated from Central High School. Shortly thereafter she began her lifelong career at the Evansville Courier and Press as one of the earliest female newspaper reporters in Evansville. One of the highlights of her career was interviewing the legendary Elvis Presley and his manager, Colonel Tom Parker when they came for a concert at Roberts Stadium. Carol loved driving the many sports cars which she owned over the years and spending time with her family and friends. She never tired of searching out unique antiques. In addition to her parents, Carol was preceded in death by her brother, Richard Wersich, and her sister Janet Suess. Carol is survived by her nieces, Julie (Scott) Schulz, Susan (David) Hanas and Elizabeth (Greg) Gott; nephews, Jeffrey (Tammy) Wersich and Gregory Wersich; great-nieces and nephews, Alyssa and Natalie Schulz, Kaitlin (Nick) Hinkley, Rachael, Sarah and Daniel Gott, Jacob, Jeremy, Joseph, Joshua, Libby, Katie and Mason Wersich. Graveside services will begin at 10:00 a.m., Monday, January 18, 2021 at St. Joseph Cemetery. Memorial contributions may be made to the Alzheimer’s Association, 701 N. Weinbach Avenue #510, Evansville, IN 47711. The family would like to thank the staff at River Pointe Health Campus for their kind and compassionate care of Carol. Condolences may be made online at www.ziemerfuneralhome.com.

The family of Carol Wersich created this Life Tributes page to make it easy to share your memories.

Send flowers to the Wersich family.