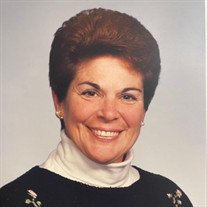 Barbara Libs Henneberger passed away Sunday, July 4, 2021 at Arden Courts Memory Care Community in Delray Beach, Florida. Born in Corydon, Indiana and raised in Evansville, Barbara was the daughter of the late John G. and Loraine E. Libs. She graduated with highest honors both from Reitz Memorial High School in Evansville in 1955, and Marian College in Indianapolis in 1959, earning a degree in sociology. Barbara also completed post graduate studies in philosophy at the College of William and Mary in Williamsburg, Virginia in 1963-64 and earned a certification from Trinity University in Washington, DC in its Education for Parish Service (EPS) Program in 1990. Prior to her graduation from Marian College, Barbara initially had summer employment as a social worker aide at Catholic Charities in Evansville. Following her college graduation, she was employed as a flight attendant for Eastern Airlines and based in New Orleans, Louisiana for one year. Thereafter, she worked for a New Orleans maritime law firm in administrative and secretarial capacities while her husband, Larry Henneberger, whom she married in 1961, attended law school in New Orleans. Accompanying her husband while he thereafter served a three-year military tour of duty with the U.S. Army in Fort Story and Fort Eustis, Virginia, they then returned to civilian life and lived in several Montgomery County, Maryland suburbs of Washington, DC, where Barbara became a homemaker as they raised their two sons. During her many years living in the Washington, DC area, Barbara effectively used her EPS training in supporting her multiple Catholic parish activities, and was especially remembered and revered for her wide range of programs teaching, counselling, mentoring and serving as a retreat advisor for successive generations of teenage parishioners and as a longstanding member of the choir of St. Patrick's Church in Rockville, Maryland. In 2002, Barbara received a Distinguished Alumna Award from Marian College, recognizing her many contributions to her school, her church and her community. Barbara and her husband were divorced in 1995. More recently, she had moved back to her Evansville roots, living in Newburgh, Indiana with her friend and devoted caregiver, Lynn Daniels. She relocated to Delray Beach, Florida in 2017. Barbara was preceded in death by her son, James, of Evansville. She is survived by her son, Lawrence lIl (Nancy) of Davenport (Orlando), Florida; her daughter-in-law, Jenny Heimburger Henneberger; grandsons, Charlie, Peter, Douglas and Gideon, of Evansville; her sister, Becky (Bob) Sharp, of Lexington, Kentucky; and brothers, John (Judy) and Michael Libs, both of Evansville; her former sister-in-law, Laura Libs, of Evansville; a number of nieces and nephews in Evansville and throughout the country, and her dear friend and caregiver, Lynn Daniels of Delray Beach, Florida. Barbara was dedicated to her Lord, her church, Christian values, and her family; loyal, caring, supportive and encouraging to her friends and even total strangers; and someone who, without fanfare, made a difference in the lives of others. Visitation will be from 3:00 p.m. to 5:00 p.m. Thursday, October 7, 2021 at Ziemer Funeral Home East Chapel, 800 S. Hebron Ave., Evansville. A Mass of Christian Burial will begin at 9:00 a.m. Friday, October 8, 2021 at St. Benedict Cathedral, 1328 Lincoln Ave., Evansville. Inurnment will follow at Oak Hill Cemetery in Evansville, Indiana. In lieu of flowers, please consider contributions in Barbara's memory to Reitz Memorial High School, 1500 Lincoln Avenue, Evansville, IN 47714 or the Little Sisters of the Poor, 2345 W. 86th Street, Indianapolis, IN 46260. Condolences may be made online at www.ziemerfuneralhome.com.

The family of Barbara Libs Henneberger created this Life Tributes page to make it easy to share your memories.

Send flowers to the Henneberger family.