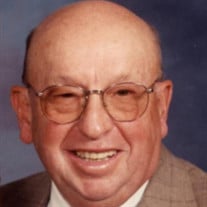 Albert Christian Gretler, 95, of Evansville, passed away Saturday, January 30, 2021 at North River Health Campus. Albert was born on September 14, 1925 to Earnest and Mary Ann (Cardno) Gretler in Chicago, IL, but was raised in Freeport, IL. He attended Freeport High School excelling in academics and participating in sports. Upon graduation in 1943, Al was accepted into the Navy’s reserve officer training program, received his commission in 1945 and served on the USS Bon Homme Richard until his honorable discharge from active duty in 1946. Al completed his college education at the University of Chicago, receiving an undergraduate degree in biological sciences and a master’s degree in bacteriology. Al was employed by Armour & Co. in the research and product development department for ten years. He met his wife, Shirley, on a blind date in 1949 and they were married in 1952. The family moved to Evansville for a promising opportunity with Mead Johnson & Company as assistant director of the Nutritional Product Development Department in 1961. He retired as director of the same department after 29 years of service. Al enjoyed vacationing with his family, especially the trip to Ireland with Shirley; playing slow pitch softball and golf; attending his children’s athletic events; coaching grade school football; weekend couple’s trips; Serra Club and in his later years, volunteering his time for St. Vincent DePaul Society. Al was an active member of Christ the King Church, currently Annunciation Parish; Served as Eucharistic Minister, usher and other roles. He and his wife, Shirley, received the Simon Brute Award. He is survived by his daughters, JoAnn Gretler and Judy Gretler of Evansville; sons, Thomas (Theresa) Gretler of Evansville, Daniel Gretler of Evansville and James (Nancy) Gretler of Bonney Lake, WA; grandsons, Brandon Gretler and Jason (Katie) Gretler, William (Cathryn) Gretler and Samuel Gretler (Paige Goergen), and Michael and Matthew Gretler; four great grandchildren and many nieces and nephews. In addition to his parents, Al was preceded in death by his wife, Shirley; brother, William; and daughter-in-law, Susan (Daniel) Gretler. Visitation will be from 10:00 am to 10:30 am Thursday, February 4, 2021 at Christ the King Church, 3010 E. Chandler Ave., Evansville. A Mass of Christian Burial will begin at 10:30 am at the church with Father Alex Zenthoefer officiating. Entombment will be at St. Joseph Cemetery following the Mass. Memorial contributions may be made to Annunciation Parish at Christ the King Church or St. Vincent DePaul, 809 N. Lafayette Ave., Evansville, IN 47711. Condolences may be made online at www.ziemerfuneralhome.com.

Albert Christian Gretler, 95, of Evansville, passed away Saturday, January 30, 2021 at North River Health Campus. Albert was born on September 14, 1925 to Earnest and Mary Ann (Cardno) Gretler in Chicago, IL, but was raised in Freeport, IL. He... View Obituary & Service Information

The family of Albert C. Gretler created this Life Tributes page to make it easy to share your memories.

Send flowers to the Gretler family.